After the failed anti-LGBTQI referendum, the government would silence NGOs with fines | Háttér Society
Skip to main content

After the failed anti-LGBTQI referendum, the government would silence NGOs with fines 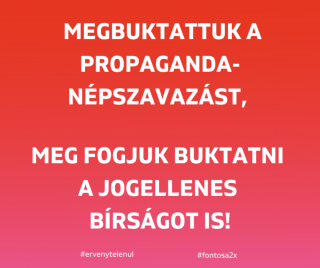 On Sunday, more than 1.6 million Hungarians cast invalid votes to reject the government's manipulative and fear-mongering referendum. The invalidity of the referendum shows that the majority of Hungarians do not support the government's exclusionary policies. Five days after the miserable failure of the government's anti-LGBTQI referendum, the National Election Committee (NEC) suddenly realized that the months-long campaign "defeats the constitutional purpose of the exercise of power."

The NEC imposed fines of HUF 176.400 (approx. 430 EUR) on 16 NGOs —including some that did not even take part in the campaign that aimed to invalidate the referendum—, and an additional HUF 3 million (approx. 8000 EUR) on each of the two main organizers of the campaign: Amnesty International Hungary and Háttér Society.

The fines, totaling nearly HUF 9 million, intend to silence the huge community of people that exercised their right to free expression and defeated the government's anti-LGBTQI referendum through democratic means.

The NEC had also underlined the importance of citizens, through a referendum, being able to participate directly in the decision-making process on the most important issues affecting the fate of the country. On Sunday, people sent a direct message through the referendum: enough of the Russian-style propaganda, enough of hatemongering! The result of the referendum is clear: the Russian-style propaganda law must be repealed. The NEC's illegal decision tells us one thing: it is no longer enough to “only” hide the fact that the referendum has failed, the government is scared and now wants to use fines to silence those who beat the homophobic and transphobic campaign.

"We will not be intimidated. It is clear that they are trying to silence us because our campaign and civil collaboration was successful. We will challenge the NEC's decision at the Curia, the highest regional court of Hungary, and this clearly illegal fine will be overturned." - said Dávid Vig, director of Amnesty International Hungary.

"The past months have shown what we can achieve together. The invalidity of the referendum has given hope to many people. We will not let that be taken away from us. We will continue to work for a safe and free Hungary for all." - said Luca Dudits, executive board member of Háttér Society.