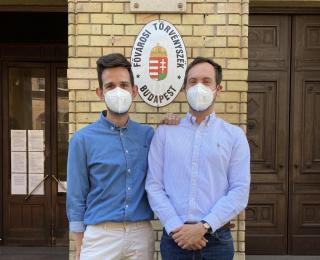 In January the pro-government news site Vasarnap.hu published a story about a “boy with two fathers”, in which, besides using derogatory language, they also claimed the couple tricked the authorities by hiding they were a same-sex couple and pretending only one of them would adopt as a single parent. The Court declared these were unfounded allegations and ordered the news site to rectify their mistake.

The #familyisfamily campaign started at the end of 2020 as a reply to the recent worrisome developments in the legal and political field. The past couple years not only saw politicians and media outlets express explicitly homophobic and slanderous statements against rainbow families (and the LGBTQI community in general), most recently the government accepted a legal amendment which makes it extremely difficult for same-sex or single parents to adopt children, and lastly they added a provision to the Fundamental Law (“The mother is a woman, the father is a man”), which clearly and intentionally excludes same-sex parents from the definition of family. All these developments led to the Foundation of Rainbow Families to join up with Háttér Society to create the #familyisfamily campaign, which aims to raise awareness, and start a public debate about the definition of family.

On January 11, 2021, two months after the campaign launched, a news site called vasárnap.hu published an article which delved into the future of a “boy with two fathers''. The publicly funded, self-proclaimed Christian website had already on several occasions been a platform for domestic violence parody or transphobic and homophobic content. In this article, titled “What future awaits the ‘boy with two fathers’?”, they write that the adoptive “homosexual couple” who were presented by an unnamed “libtard newspaper” “probably pretended to be a single man in the adoption procedure and made no declaration of their preferred two-men family model”. Even though the author doesn’t explicitly name any couple, it is quite obvious that the article, published at the height of the rainbow family campaign, refers to the two leading organizers of the Foundation for Rainbow Families, Marci Pál and Ádám Hanol – and accuses them of forging public documents.

In contrast with this claim, Marci and Ádám were absolutely transparent about themselves from the very first moment of the adoption procedure. In line with the current legislation, Marci started the process as an individual, but they both took part in the necessary psychological and environmental examinations. When they made a request to vasárnap.hu to rectify their mistake, the news site denied to do so on the grounds that no one was named in the article, therefore Marci and Ádám could not be identified as the couple in question. However, as they were the only same-sex couple with an adopted boy prevalent in the media at the time, it was crystal clear who the author was talking about.

Marci and Ádám turned to Háttér Society’s Legal Aid Service to file a lawsuit for press rectification. The Budapest Court of Appeal ruled at first instance that vasárnap.hu made false claims when they wrongfully accused the couple of tricking the authorities. The Court pointed out that due to the public prominence of the #familyisfamily campaign, it was obvious who the article referred to, additionally, vasárnap.hu didn’t even try to support their statements with facts, which means they knew, too, that they were reporting false information.

The website is just another tool in the hands of pro-government actors to spread homophobic messages. This spring, the Commissioner for Human Rights of the Council of Europe voiced her concerns, too, saying that violent, homophobic organizations and voices receive significant publicity in Hungary, which fosters animosity towards the LGBTQI community.

These false allegations mirror the position of the government, according to which same-sex couples adopt children by deceiving the authorities and using “legal loopholes”. The Hungarian legislation has so far only permitted joint adoption to married couples, however, there has never been any rule or law barring a person living in a civil or registered partnership from applying for individual adoption. Due to the legal amendment the Parliament accepted in December 2020, it’s not the child protection professionals who decide in these cases anymore, but a politician, Katalin Novák, Minister for Families, who now has the sole power to judge single parent / individual applications. Regardless, Háttér Society encourages everyone wishing to adopt to start the procedure. The Hungarian legislation explicitly forbids discrimination based to sexual orientation, and if Katalin Novák denies adoption for people living in a same-sex partnership, that decision can be challenged before court. In any such case the Háttér Society Legal Aid Service will offer free legal support.

The judgement described is at first-instance, not final.