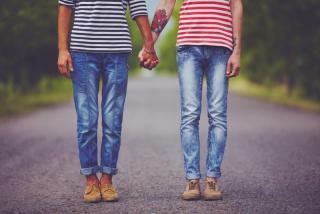 Same-sex marriages conducted abroad have to be recognized in Hungary as registered partnerships - says in a binding decision the Regional Court of Budapest. The case was launched by an American-Hungarian lesbian couple, whose Belgian marriage the Hungarian authorities would not register. Háttér Society provided legal representation to the couple.

An American-Hungarian couple living in Belgium did not accept the unreasonable, discriminatory practice of the Hungarian authorities, and initiated a judicial review of the authority’s decision of rejection. On April 25 2017, the Administrative and Labour Court of Budapest decided in favor of the couple, the decision was upheld on February 8, 2018 by the Regional Court of Budapest.

According to the courts’ argumentation current Hungarian legislation contains no explicit provisions, neither requiring, nor forbidding the recognition of foreign same-sex marriages, so according the general principles of international private law a foreign same-sex marriage should be recognized as the institution most similar to it in Hungarian law, that is registered partnership. Rejecting such a recognition would infringe on the fundamental rights of the couple, as their stable relationship would not be recognized.

“Commonsense won over bigotry and the authorities’ small-mindedness” - commented on the decision Tamás Dombos, board member of Háttér Society, the organization providing legal representation to the couple. “Dozens of couples in a similar position have contacted our organization, especially after the first instance decision in April, as the practice made their life very complicated. Since Hungarian law declares the near equivalence of marriage and registered partnership, it is hard to understand why the authorities refrained from this solution before.”