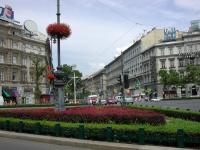 Two young men were convicted for the crime of violence against a member of a community for attacking and spitting at two gay Brazilian students studying in Budapest on April 21, 2014. The victims were represented by Háttér Society, the judgement is not yet binding.

Levi and Lucas were studying in Hungary for a year on a Brazilian state scholarship. On April 21, 2014 they were heading home with a friend after a movie night, when two men stopped them and started questioning them on their sexual orientation and whether they had slept with women before. The victims tried to get out of the situation, but their attackers stood in the way, kicked one of them, spat at the other, while calling them “faggot” several times.

The victims turned to the Legal Aid Service of Háttér Society, who helped them submit a report to the police. The police managed to identify the perpetrators based on the log file of a nearby ATM. In its judgement on February 11, 2016 the court found both defendants guilty of violence against a member of a community. The defendant kicking the victim received a sentence of 1.5 year imprisonment - suspended for 2.5 years, the other defendant received a sentence of 120 hours of community work for being an accomplice to the crime.

One of the victims said the following at his first police interrogation: “This incident hit me really deep. When I was heading home from a club last week, I rather went back and waited for my friends, I was too afraid to leave on my own. I have never experienced such an attack before, I was really shocked. For me Budapest was a calm, multicultural city, and now I am afraid to walk alone on the street during the night.”

“The case calls attention to how false the popular misconception is that homophobic and transphobic hate crimes happen only at the Pride March in Hungary” - says Tamás Dombos of the Legal Aid Service of Háttér. “For many LGBTQI people such attacks are part of their everyday life, and yet they do not report it, because they have no trust in the police or are afraid of them. It is very import to report all such incidents, that is why we launched our Report homophobia! website and smartphone app.”

A 2012 survey by the Fundamental Rights Agency of the European Union found that homophobic and transphobic hate crimes are a problem throughout Europe: of the more than 93,000 LGBT respondents, 26% have been become victim of violence or threats, slightly higher ( 28%) in Hungary. As opposed to these high numbers, official statistics in Hungary only contain a few dozen hate crime cases a year: partly because the victims do not report them, partly because the police fail to start a criminal procedure or disregard the hate motive and press charges for a less serious crimes.