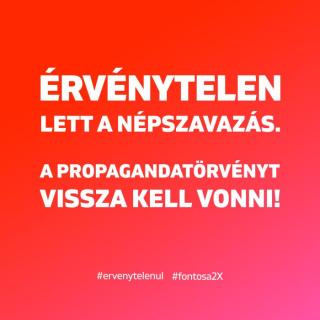 The government’s anti-LGBTQI referendum, held on the same day as general elections, failed.

The anti-LGBTQI referendum was the government’s response to the European Commission launching an infringement procedure against Hungary in July 2021 due to the discriminatory measures of the propaganda law and a disclaimer imposed on a children's book with LGBTIQ content. Hungarian legislation at the time did not allow holding a referendum on the same day as the general election, but this was no barrier to the government: they changed the law, which allowed the referendum to become a key topic of  the election campaign.

Amnesty International Hungary and Háttér Society along with 12 NGOs organized a nation-wide campaign to invalidate the discriminatory and exclusionist  referendum, whose biased and manipulative questions enticed fear and hatred towards LGBTQI people. The campaign highlighted the personal stories and testimonies of allies; the friends and families of LGBTQI people and how the referendum impacts their lives. With over 400 volunteers all over the country,NGOs delivered the message everywhere from Budapest to the smallest settlements: if we want to live in a safe and free Hungary, we must reject the referendum and cast an invalid vote.

Besides millions that stayed at home, over two million people voted invalid or picked up the ballot, but did not cast a vote. This is a huge success. The government's attempt to strengthen the anti-LGBTQI law adopted last year thus failed, the referendum turned out to be legally invalid.

“More than 1.6 million people casted an invalid vote. Hungarians have had enough of Orbán’s attacks on the LGBTQI community. It has been a tremendous, common effort but we did it: the people expressed strong and clear that they stand with LGBTQI people,” said Luca Dudits, executive board member of Háttér Society.

“The outcome of the referedum is crystal clear: people reject the government's homophobic and transphobic campaign. The next step is also clear: the propaganda law must be immediately repealed in line with the outcome." - said David Vig, director of Amnesty International Hungary.

After the failed anti-LGBTQI referendum, the government would silence NGOs with fines
Highest ever fine imposed on swimming-pool discriminating against LGBTQ sports club in Hungary
Hungarian ombuds finds rejection of lesbian woman’s application to adopt unlawful
Social acceptance of LGBTQI people at historic peak in Hungary