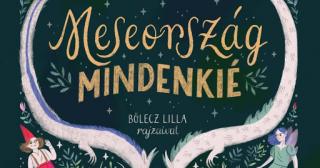 A lack of warning about “patterns of behavior deviating from traditional gender roles” appearing in a book violates the rights and interests of consumers - says the Hungarian Consumer Protection Authority. Háttér Society and Labrisz Lesbian Association will challenge the discriminatory ruling in court.

Fairyland is for Everyone, published by Labrisz Lesbian Association in September 2020 is an extremely popular storybook, praised by professionals, in which children can encounter issues of social diversity in a form appropriate to their age. The storybook includes elderly and Roma people, people living in poverty, adopted or abused children and heroic girls, as well as lesbian, gay, and trans characters. The storybook doesn’t address the topic of sex at all, lesbian and gay characters appear just like heterosexual characters would in traditional tales.

In September, the storybook was the subject of heated debates and controversies. After a far-right politician shredded it at a press conference, the book flew to the top of the charts and was sold out in stores overnight. However, pro-government politicians expressed their displeasure with the book, with prime minister Viktor Orbán citing a certain indestructible red line that “homosexuals should not pass in regards to children”.

On Tuesday, the Hungarian Consumer Protection Authority ruled that it is an unfair commercial practice to forgo warning consumers that “patterns of behavior deviating from traditional gender roles” appear in the stories of Fairyland is for Everyone. The Authority argued that the illustrations of the fairytale collection do not suggest that its content “goes beyond the usual content of fairy tales.” With its cover depicting common fairytale characters, the book allegedly deceives the prospective buyer of the book into thinking that it is an average, regular storybook - argues the Authority. Potential buyers, however, should be informed about the display of “patterns of behavior deviating from traditional gender roles” prior to purchase. The Authority claims that the rights and interests of consumers have been violated in the absence of such information.

A day after the ruling, Hungarian LGBTQI organizations launched a campaign that raises attention to the hypocrisy of the Consumer Protection Authority. They encourage people to report Disney movies and classic fairytales that also depict “patterns of behavior deviating from traditional gender roles”. If consumers are not warned that Lion King’s Simba finds family in Timon and Pumba, two male characters, or that Cinderella is  raised by three women, is that not considered an unfair commercial practice?

To oblige Labrisz Lesbian Association, the publisher of the book, to declare on its cover that its fairytales “differ from the traditional” amounts to stigmatization  of works depicting social diversity. Restricting or attempting to restrict the display of a “pattern of behavior deviating from traditional gender roles” goes against freedom of expression and the prohibition of discrimination guaranteed by the Fundamental Law.

We do not accept the unconstitutional ruling of the Consumer Protection Authority. Labrisz Lesbian Assoication will ask for a judicial review of the Authority’s decision. Háttér Society will provide legal representation in the administrative lawsuit. We expect the court to rule that the Consumer Protection Authority acted in a discriminatory and unconstitutional way when stigmatizing works depicting marginalized groups.

This is not the first time that the Hungarian Consumer Protection Authority has taken a discriminatory decision. In 2019 they imposed a fine of approximately 1400 EUR on Coca-Cola for its “Love is Love” posters depicting same-sex couples, arguing that the posters “harm the physical, mental, emotional or moral development of children and adolescents”. Unfortunately, Coca Cola did not challenge the Authority’s decision in court.

“It is obvious that the Consumer Protection Authority is acting under political pressure,” said Tamás Dombos, board member of Háttér Society. “The government has geared up its crusade against LGBTQI people in 2020 ‒ and it looks like this will continue in 2021. The Hungarian LGBTQI community and organizations are in total unity and ready to fight back, every step of the way.”