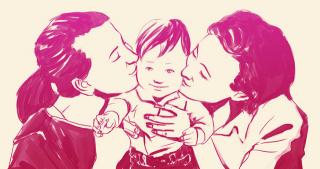 A recently published report of the Commissioner for Fundamental Rights found that the Hungarian authorities’ decision to reject the application of a woman living with her same-sex partner to adopt a 16-month-old Roma girl infringed on the child’s right to protection and care, and amounted to unlawful discrimination based on sexual orientation.

The story of the lesbian couple from the Southern Hungarian city of Pécs had a positive start: Adrienn and Szilvia had been living together for five years when they decided to become parents via adoption. Since Hungarian legislation does not allow joint adoption for same-sex couples, they decided that Adrienn will legally apply to adopt. From the beginning of the procedure they were very open about their relationship, and the psychological assessment found that they are particularly suitable to become parents.

In a few months’ time they were offered a child: Natália, a 16-month-old girl of Roma origin. The couple was getting acquainted with the child for months, and in April 2016  they took care of her during daytime for three weeks. The little girl soon developed a bond towards her new mothers. One day, however, the child protection service called them and said: due to an intervention from “above” the adoption procedure had to be stopped. The decision disrupted the life of the child: she did not eat properly, lost weight, her speaking skills regressed, was constantly crying, became shy with strangers, so she had to be taken to a child psychologist and an expert on early child development.

With the help of the legal aid service of Háttér Society, Adrienn first appealed the authorities’ decision, and after it was rejected, she turned to the Commissioner for Fundamental Rights. The Commissioner’s investigation lasted for over a year, and concluded with a report finding that several fundamental rights were infringed in the procedure, such as the right of the child to protection and care and the right to fair procedure, and as a whole the procedure amounted to discrimination based on sexual orientation. The Commissioner emphasized that “a person wishing to adopt has no right to adopt a particular child, but s/he does have the right to equal treatment and equality before the law in the procedure.” The report makes reference to the E. B. v. France judgment of the European Court of Human Rights that laid down that sexual orientation should not be a factor in adoption decisions.

“The Commissioner’s report made us happy and bitter at the same time” - comments Adrienn on the result of the investigation. “It was one of the most decisive experiences of our life to get to know Natália, we nearly felt like her parents, and she considered us her parents as well. The report now confirms that the authorities failed to perform their most important function: to protect the best interest of the child. On the other hand, the report is an important step on the road to legal equality.”

Hungary introduced recognition for same-sex couples in 1996 in the form of cohabitation, and since 2009 registered partnership grants most rights available to different-sex spouses. Notable exceptions include parenting rights such as access to assisted reproduction, second parent adoption and joint adoption. Individual adoption, however, is available regardless of family status, however, the law prescribes that married (thus heterosexual) couples have to be given preference. Hungary has a high number of children up for adoption: at the end of 2016 1913 children were on the waiting list to be adopted. Children of Roma origin have significantly lower chances of being adopted.