ILGA: Situation of LGBTI people in Hungary has significantly deteriorated 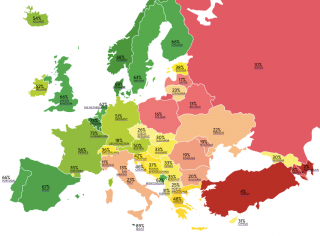 The legal situation of the LGBTI community in Europe worsened the most in Hungary in the last year, according to the Rainbow Europe map published by ILGA-Europe on Thursday. The suspension of legal gender recognition procedures and the lack of security at LGBTI events played the biggest role in Hungary falling from 19th to 27th place in just one year. The report also highlights hate speech by politicians.

ILGA-Europe, the European umbrella organization, has been reporting on the situation of LGBTI people in Europe every May since 2011 in connection with the International Day against Homophobia and Transphobia (17th of May). The publication, entitled Rainbow Europe, collects data on laws and policies that have a direct impact on the human rights of LGBTI people in 49 European countries. Based on the data collected, they publish an index and a map every year. The 2020 report covers the calendar year of 2019, from January to December, so it is important to highlight that the remarkable drop in the index does not yet include in the omnibus bill submitted and currently debated in Parliament undermining transgender people’s rights. Hungary reached its highest score in 2013, and has since suffered losses every year except for 2016 and 2018. This represents a total decrease of 22% over the last seven years, and a drop from the 19th to the 27th place.

The drastic deterioration of the situation in 2019 is due to several factors. The report highlights the positive and negative phenomena that affect scoring. Unfortunately, the Hungarian report is dominated by negative developments. In terms of scoring, the decline is mainly due to the 2018 suspension of legal gender recognition procedures and inadequate police protection for LGBTI events, but the introduction of new criteria that the Hungarian legal system does not meet also plays a role.

The report attached to the index highlights the spread of prejudiced speech, including by the extreme right-wing party Mi Hazánk and governing Fidesz deputy speaker István Boldog who called for banning the Budapest Pride Parade, and the statements of László Kövér, the Speaker of the National Assembly who called homosexuals second class citizens, and likening same-sex adoption to pedophilia.

The report also mentions several bias-motivated attacks: Mi Hazánk disrupted an LGBTQI Roma event in Szeged, in Southern Hungary where they harassed participants with homophobic and racist remarks. The Aurora community center in Budapest has also been the target of homophobic attacks.

The negative developments are not limited to legal issues: the results of the 2019 Eurobarometer survey show that Hungarians' attitudes towards LGBTI people have deteriorated in several aspects, while same-sex marriage is now supported by more than opposed.

ILGA-Europe has also made several recommendations to the Hungarian government: to adopt an equality action plan to combat discrimination based on sexual orientation, gender identity and gender characteristics; continue to ensure the possibility of adoption for same-sex couples; and develop fair and transparent procedures for legal gender recognition

Háttér Society and Transvanilla Transgender Association contributed from Hungary to the data collection and the publication.