The government’s propaganda referendum bound to be invalid 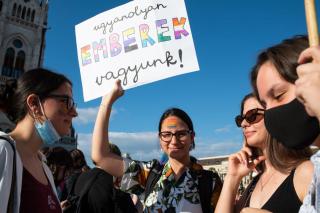 41% of the total population is not planning on participating in the referendum and almost half of the opposition voters will vote invalid on the 3rd of April - finds a representative survey by Medián commissioned  by Amnesty International and Háttér Society.

The survey was conducted at the end of February before the government's manipulative and fear-mongering billboard and video campaign, also preceding the campaign of 11 NGOs encouraging voters for invalid voting.

The survey showed that voters of the governing party value the referendum much more than opposition voters or uncertain voters. One-fourth of all opposition voters (who have heard about the topic before) think that the aim of the referendum is to distract the public’s attention. On the contrary, the Fidesz voters think its goal is to strengthen child protection.

The civil society campaign that aims to invalidate the referendum created by Amnesty International andHáttér Society, in collaboration with 11 other NGOs, LGBTQI people are portrayed among their family, friends, and colleagues to raise awareness to the fact that the invalid questions require an  invalid vote. One of the faces of the campaign said the following to reason vote invalid:

“I’m afraid that this four-question referendum really reinforces hatred,prejudices, and discrimination against the LGBT community, against you. I would not like to be part of  this, better said: I decide not to be part of this.”

Luca Dudits, executive board member of Háttér Society said:  “It is promising to see how many people refuse to participate in the government’s hate propaganda and that they choose to express their opinion with an invalid vote.”

“ It is clear that the majority of Hungarians are not willing to participate in hate-mongering. They are voting invalid or do not participate in the referendum at all. In this form, it is pointless to hold a referendum” added David Vig, director of Amnesty International Hungary.

The referendum is valid only if more than half of all voters vote validly and is successful if more than half of all participants answer yes or no to the questions. From the results of the  survey, it is clear that the majority of the voters would not vote validly, therefore the referendum will likely not reach the validity threshold although the election day timing boosts participation.

The cited opinion poll was conducted by the Median Institute of Opinion and Market Research on behalf of Amnesty International Hungary and Háttér Society between 22 and 26 February 2022, with a telephone survey of a nationally representative sample of 1,100 people. Those who chose not to finish the poll or did not have a position on the question were left out of it.