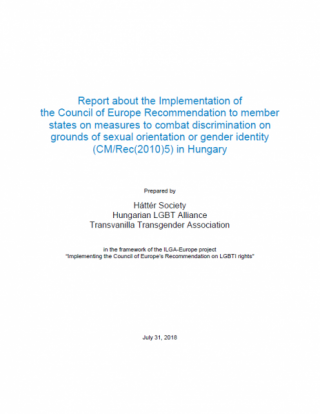 On March 31, 2010 all 47 Member States of the Council of Europe adopted a Recommendation on on measures to combat discrimination on grounds of sexual orientation or gender identity. Háttér Support Society prepared a detailed English language report about the implementation of the Recommendation in Hungary. The basis of the report is responses sent by various government agencies to questionnaires by Háttér, a summary of findings of earlier reports and research projects, and information gathered from LGBT and other human rights NGOs. The report contains detailed recommendations for the Hungarian Government on legislative changes or public programs and initiatives needed to comply with the Recommendation.