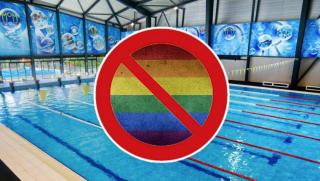 The Equal Treatment Authority found that a local-government run swimming pool discriminated against an LGBTQ sports club when it declined to rent out two of its swimming lanes for a sport event. The Authority imposed a fine of 1 million HUF.

Atlasz Sports Club offers lesbian, gay, bisexual, transgender and queer (LGBTQ) people an opportunity to practice sports in an LGBTQ-friendly environment in Hungary since 2004. One of their flagship events is the annual Atlasz Sports Day. In January 2017 they contacted MOM Sports Pool, a swimming pool operated by a subsidiary of the Budapest District XII Local Government to rent two lanes for their event. The sports center confirmed the availability of the pool via email, but when they learnt the name of the club, they declined the offer.

With the help of the legal aid of Háttér Society, the sports club turned to the Equal Treatment Authority to investigate the case. During the investigation, the sports center argued that the rejection was not based on the sexual orientation or gender identity of the members of the club, but rather overcrowding in the pool and the fact that Atlasz wanted to bring their own trainer, which was not allowed by the house rules. The Authority, however, found that neither the pool occupancy nor the ticket sale data of the pool supported the argument, and the house rules were modified only after the investigation was launched to conform to the legal argumentation of the center.

Hungary’s equal treatment legislation entered into force in 2004, and it forbids discrimination and harassment based on sexual orientation and gender identity in employment, education, housing, healthcare, social benefits and access to goods and services. The Equal Treatment Authority was set up as an autonomous public body to offer a cheaper and quicker alternative to litigating discrimination cases in court.

Equal Treatment Authority fines Budapest school for discriminating against child with lesbian mothers
Instead of controlling the pandemic, Hungarian government launches crusade against LGBTQI people
Equal Treatment Authority: Rejection of transgender job applicant was unlawful
Press release: We object to the statement of the Calvinist University