In January the pro-government news site Vasarnap.hu published a story about a “boy with two fathers”, in which, besides using derogatory language, they also claimed the couple tricked the authorities by hiding they were a same-sex couple and pretending only one of them would adopt as a single parent. The Court declared these were unfounded allegations and ordered the news site to rectify their mistake.

Instead of controlling the pandemic, Hungarian government launches crusade against LGBTQI people News

A recently published report of the Commissioner for Fundamental Rights found that the Hungarian authorities’ decision to reject the application of a woman living with her same-sex partner to adopt a 16-month-old Roma girl infringed on the child’s right to protection and care, and amounted to unlawful discrimination based on sexual orientation.

The Situation of LGBT Families in Hungary Publications 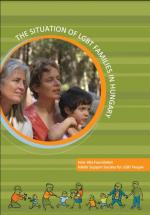 An English language publication about the legal and social situation of same-sex couples raising children in Hungary prepared jointly with Inter Alia Foundation.