Orbán spreads lies to defend the anti-LGBTQI law in Brussels 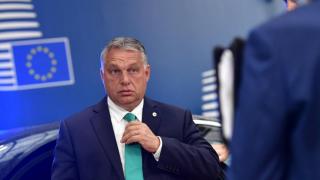 The Hungarian government faces serious criticisms on the recently adopted homophobic and transphobic propaganda law.  When questioned by European leaders, Orbán spread a number of lies to defend the law. In this article we provide a detailed rebuttal of those lies.

Prime Minister Viktor Orbán was put on the spot for adopting a homophobic and transphobic propaganda law in Hungary. Since the bill was tabled, children’s rights and human rights organizations have been criticizing the law for being stigmatizing, inhumane and harmful to LGBTQI youth in particular, as it exposes them to even more danger and risks. The government has not responded to any of these criticisms. At the European Council summit last week similar points have been raised by European leaders, Orbán defended the law by spreading a number of open lies. We refute his untrue claims one by one.

Orbán claimed that “there is no law about homosexuality”. The truth is that the law passed two weeks ago makes explicit references to homosexuality six times in the context of declaring that it is “prohibited to make available to children under the age of eighteen any (...) content [which] promotes or portrays deviation from the self-identity in line with the birth sex, gender reassignment, and homosexuality.”

Orbán also claimed that "the law is about the sexual education of children regardless of its content." The truth is that only the ‘promotion’ and ‘portrayal’ of homosexuality has been banned, but the portrayal of heterosexuality has not been subject to such restrictions. It is true that the law also bans content that “depicts sexuality as having a purpose in itself”, but while the ban on the portrayal of heterosexuality is applied only selectively to such portrayals, there is an overall ban on portraying homosexuality and transgender identities in any form.

Orbán also claimed that “it is up to the parents to decide how children are acquainted with the issue of sexuality”. The truth is that the law does the opposite, it restricts the rights of parents: it will no longer be possible for parents to teach their children to be accepting towards gay, lesbian and transgender people. Due to the broad and general prohibitions in the Child Protection Act and Family Protection Act, if a parent buys their child a youth novel featuring an LGBTQI character or watches a film depicting an LGBTQI character on TV with a child under the age of 18, they violate the law, as such behaviour amounts to making content portraying “deviation from the self-identity in line with the birth sex” and homosexuality available to a minor.

Orbán also claimed that “he is a rights defender who was a freedom fighter during communism when homosexuality was still being punished.” The reality is that Viktor Orbán was born in 1963. Homosexuality is not punished by law in Hungary since 1962.

Prime Minister Orbán was not the only one who defended the law with lies. A few days ago, Justice Minister Judit Varga said that “the gay community is happy and satisfied in Hungary.” The truth is that according to more than 4,000 Hungarian LGBTQI people surveyed by the European Union Agency for Fundamental Rights, 95% of Hungarian respondents said that the government does not effectively combat prejudice and intolerance against LGBTI people or respond to the safety needs of LGBTI people.