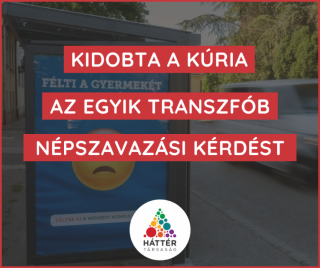 The Curia, the highest regular court in Hungary, has refused to validate a question the government submitted as part of an anti-LGBTQI referendum. Although the National Electoral Commission accepted the question "Do you support making gender reassignment treatments available to underage children?", the Curia ruled that this question cannot be the subject of a referendum.

On 21 July 2021, Minister of Justice Dr. Judit Varga submitted five anti-LGBTQI questions to the National Electoral Commission on behalf of the Government. The referendum was initiated by the government in response to an infringement procedure launched by the European Commission against the homophobic and transphobic propaganda law adopted by the Hungarian Parliament in June. The referendum aims to counter the infringement by proving that the law has social support.

On July 30, the National Electoral Commission approved all five questions of the referendum, but several actors challenged the decisions before the Curia. On October 22 the Curia announced its verdict on the first question;  the judicial review of the other questions is pending.

The Curia has ruled that such a general question about gender reassignment treatments on minors cannot be put to a referendum. Whether “yes” or “no” votes get a majority in a referendum would result in an unconstitutional situation. If the “yes” votes were in the majority, all children would have the right to request such treatments. And if “no”-s were, no such treatments could be performed on any child, regardless of their specific situation. However, intersex, transgender children with gender dysphoria, and cisgender (non-transgender) children are not in a comparable situation. Such substantially different situations cannot be treated in the same way.  A general ban on the issue of a referendum would disproportionately restrict the right of self-determination and the right to physical integrity of those concerned.

“We welcome the Curia’s decision and are hopeful that similarly well-reasoned decisions will be made on the other four questions as well, taking into account the fundamental rights of those concerned,” said Luca Dudits, executive board member of Háttér Society.